Problems in the male partner, also known as male factor infertility, are seen in about 40% of infertile couples.  Conservatively estimated, this means that 2.5 million American men would potentially benefit from fertility evaluation.  In addition, about 1% of men who present with the symptom of “infertility” will actually have a serious medical problem causing the infertility that, if left untreated, may jeopardize a man’s health or life. 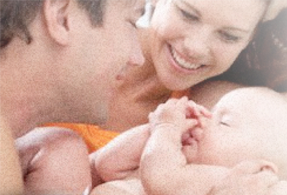 The most important part of the evaluation of the infertile male is the history and physical examination.  Even in this era of “high-tech” medicine, it has been our experience that in 90% of cases an accurate impression is obtained from an initial visit where a thorough history, and light microscopic examination of one or two semen specimens.  In the fertility evaluation of a couple, it makes more sense then to start with the male partner, whose initial evaluation may be performed rapidly and non-invasively.

Despite the availability of advanced reproductive technologies, detection of the problem causing male infertility and establishment of directed treatment is possible in most cases.  In GENES fertility institute, the male fertility evaluation is conducted by Dr. Fernando Rodriguez, a Board Certified clinical Andrologist with fifteen years of experience.  Further testing such as a physical evaluation is performed by an Urologist and usually serves to confirm the preliminary diagnosis and help direct the course of therapy.

At arrival to our office, the patient is asked to fill out, with his partner, a detailed fertility questionnaire.  The history begins with an assessment of the couple’s prior and current fertility status. The age of the partners and the duration of unprotected intercourse is established.  Fertility evaluation is appropriate sooner rather than later when there has been a history of infertility in a prior relationship or risk factors leading the couple to suspect that a fertility problem exists (e.g., varicocele, cryptorchidism, testicular neoplasm, chemotherapy, substance abuse).

For idiopathic infertility the chance of ultimate success is inversely related to the duration of infertility.  It should be established as to whether the infertility is primary or secondary for each partner and, if secondary, the nature and outcome of prior pregnancies with the same or any previous partner.  Any previous infertility evaluation or treatment for either partner should be noted as well.

The man should be questioned regarding the nature and volume of a typical ejaculate. A markedly diminished semen volume and clear-water like fluid suggests the absence of the seminal vesicle component, associated with either ejaculatory duct obstruction or congenital absence of the vas deferens (CAV).

Normal orgasm with low or absent semen volume should lead one to suspect retrograde ejaculation and warrant examination of a post ejaculatory urine specimen for the presence of sperm.  Semen that fails to liquefy suggests prostatic dysfunction.  Proteolytic enzymes present in prostatic secretions cause liquefaction of the protein coagulum derived from the seminal vesicles.

The approximate age of onset of puberty should be ascertained as a part of the medical history, since this point in life may provide useful information.  Post-pubescent mumps, for instance, is associated with a 30% risk of unilateral orchitis and a 10% risk of bilateral orchitis, which may result in severe abnormalities in spermatogenesis.

Most men will usually remember pubertal landmarks only if they were very early or very late.  Precocious puberty suggests an adrenal abnormality such as congenital adrenal hyperplasia.  Very delayed or incomplete sexual maturation suggests hypogonadotropic hypogonadism (Kallmann’s syndrome when associated with anosmia) or pantesticular failure, such as Kleinfelter’s syndrome.

All conditions or illnesses for which the patient has been or is currently being treated, including all medications currently or previously taken, are documented.  Many prescription drugs interfere with spermatogenesis, including anabolic steroids.  Drugs of abuse such as alcohol, marijuana, and cocaine are directly gonadotoxic.  A detailed occupational history is directed toward identifying exposure to gonadotoxic agents such as heat, ionizing radiation, heavy metals, and pesticides.  A family history directed at fertility problems in parents and siblings may be important.  Intrauterine exposure to diethylstilbestrol (DES) is also associated with male genitourinary tract anomalies and dysfunction. 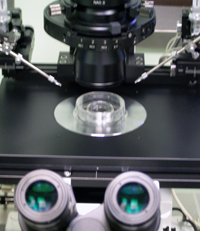 Manual light microscopic evaluation of sperm concentration, motility, and morphology is still the gold standard.  Specimens originally read as azoospermic should be centrifuged and the pellet examined for sperm.  Specimens with head-to-head or tail-to-tail agglutination are evaluated for antisperm antibodies or infection. Infection may be inferred from the presence of White Blood Cells (WBC’S) or leukocytospermia (>1x 106WBC/ml).  Men with agglutination or leukocytospermia should have their semen cultured for aerobic and anaerobic organisms as well as Chlamydia and Mycoplasma. 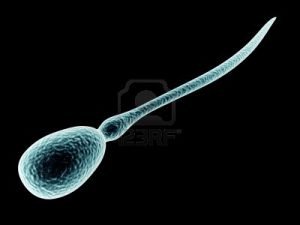 Proper interpretation of morphologic parameters requires an understanding of the scoring system and criteria employed by testing laboratory.  Severe abnormalities in sperm morphology are associated with poor fertilizing capacity when strict criteria (Kruger) are used.  Men with fewer than 14% perfectly shaped sperm usually fail to fertilize, unless micromanipulation in assisted reproduction (IVF-ICSI) is used.  Large numbers of tapered sperm are seen when testes have been exposed to elevated temperatures, such as in varicocele, cryptorchidism, or retractile testes conditions, or in the testes of men who take saunas or hot baths.

Antisperm antibodies bound to sperm are associated with lower pregnancy rates.  Risk factors for antibodies include torsion, epididymitis, orchitis, unilateral or partial obstruction, and large varicoceles.  These are all conditions associated with impairment of the blood-testis barrier that usually prevents sperm antigens (which appear at puberty) from being exposed to the general circulation.

A postcoital test is useful for evaluating sperm-cervical mucus interaction.  A fair to good semen analysis associated with a poor postcoital test is an indication for intrauterine insemination (IUI).  Although IUI can overcome cervical mucus antibodies or decreased counts, the success of IUI is dependent on the sperm’s ability to fertilize an egg.

Basic endocrine (hormonal) evaluation includes measurement of serum testosterone (T) and follicle-stimulating hormone (FSH).  Testosterone is necessary for the development and maintenance of secondary sexual characteristics and libido as well as initiation and maintenance of spermatogenesis.  Serum FSH crudely reflects the status of the seminiferous epithelium.  Elevated serum FSH results from impaired secretion of inhibin, a Sertoli cell product that normal feeds back at the pituitary and hypothalamus to turn off FSH secretion and suggests abnormalities in the seminiferous epithelium and subsequently spermatogenesis.

An FSH level greater than two to three times the upper limits of normal suggests severely impaired seminiferous tubule, but may still be treatable.  Luteinizing hormone (LH) is stimulatory to the Leydig cells and hence testosterone production.  Isolated LH abnormalities are very rare.  LH levels need be obtained only in men with abnormal T levels.

Low levels of FSH, LH, and T are diagnostic of hypogonadotropic hypogonadism.  These men have a delay or failure in the onset of puberty, and therefore poorly developed secondary sexual characteristics and small firm testes.  Testosterone replacement will masculinize these men but testicular growth and the initiation of spermatogenesis requires gonadotropin replacement.

Hypogonadotropic hypogonadism is usually due to a pituitary tumor, with the most common pituitary lesion being a benign prolactinoma.  These are usually associated with a decreased libido, an elevated serum prolactin level, and decreased serum T and LH levels.  Both macro and microadenomas are often best treated with bromocriptine. Serum estrogens, prolactin, and adrenal steroids are only measured if clinically indicated (low serum T, decreased libido, gynecomastia, or a history of precocious puberty).